Why People Are Buying and Selling Right Now 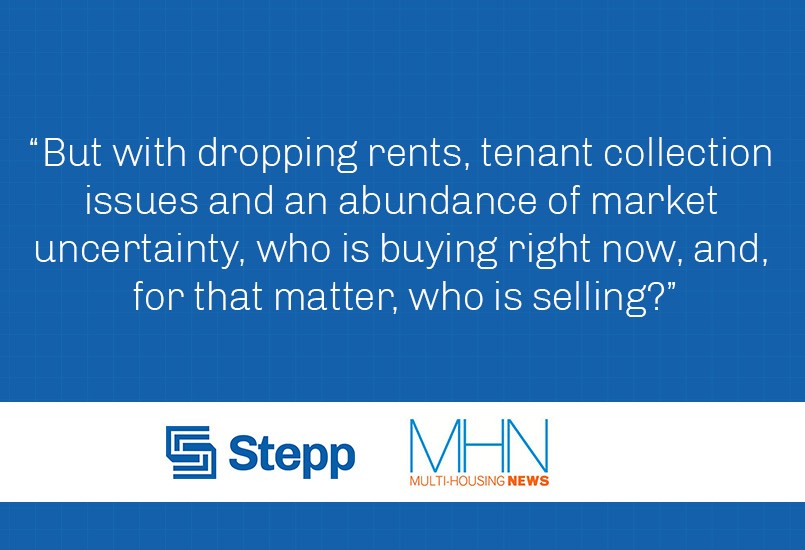 The investment market is getting frothy again, says Mark Ventre of Stepp Commercial. Should you jump in?

When a client asked me to underwrite their apartment building in the early days of the pandemic, I told them it would be an exercise in futility, since at that time, there was quite literally, no market. In late March and April, the entire marketplace became virtually nonexistent, so any value I pegged would have been merely theoretical.

Then in May, as we learned to cope with this new reality, buyers and sellers began to dip their feet back in the water. Albeit anemic compared to pre-COVID-19 levels, the marketplace started to show signs of life.

But with dropping rents, tenant collection issues and an abundance of market uncertainty, who is buying right now, and, for that matter, who is selling?

From the buy-side perspective, high-net-worth individuals, family offices and syndicators targeting small-cap deals are currently making the market. The discount from pre-COVID-19 levels, while not enormous, is just enough for the numbers to make sense where they may not have in the past. Despite the possibility of short-term downside risk, willing buyers with committed capital and longer hold horizons are jumping into the game. They are taking advantage of the low interest rate environment and aren’t as concerned about timing the bottom perfectly.

If the numbers make sense, they make sense—in any market. Some believe that 2020 is akin to 2009. While it certainly didn’t seem so at the time, that year turned out to be one of the best buyers’ markets this century.

From the sell-side perspective, prices are below where they were just a few months ago, so why not just ride it out?

For many smaller mom and pop owners and family offices who were already tired of managing apartments and dealing with tenants, COVID-19 was the final straw.  Burdensome and over-regulated, they feel the apartment market of yesteryear is gone, and, rather than possibly wait years for prices to return to pre-pandemic levels, they have determined their money could be working harder for them elsewhere.  This group largely consists of longer-term owners who have built up considerable equity and are seeking alternative, low-maintenance investments.

Other seller types are looking to trade into apartment buildings in states with fewer regulations. Recent legislation throughout the country, especially in New York, California and other coastal states, is becoming increasingly onerous and prohibitive.  To make matters worse, upcoming state and municipal ballot initiatives, if passed, could have significant and long-lasting impacts on values and returns.

Everyone’s business plans and risk thresholds are different. While some might see this as a precarious time to buy or sell, others see it as the biggest opportunity since the financial crisis.