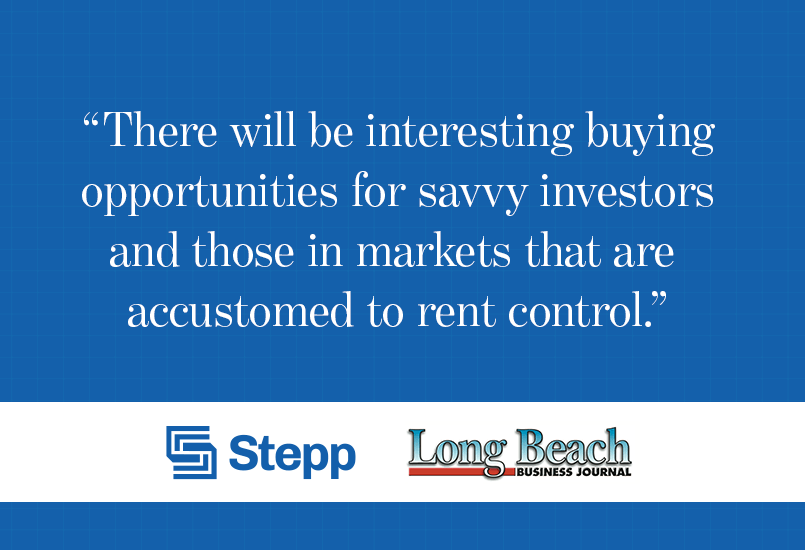 In October, Gov. Gavin Newsom signed Assembly Bill (AB) 1482, which as of January 1, 2020 will instate a cap on residential rent increases to 5% plus the percentage change in cost of living,
or 10% – whichever is lower. The bill, which has a January 2030 sunset date, led to a flurry of rent increases and evictions in urban areas, as widely reported by state news outlets, and in Long Beach recently resulted in a temporary moratorium on “no-fault” evictions. While local multi-family brokers expect to see more far-reaching effects next year, there have already been some market changes in Long Beach.

“What I anticipated was kind of a slowing down of the market in terms of sales velocity, but I really haven’t seen much change at all,” Steve “Bogie” Bogoyevac, senior managing director of investments for Marcus & Millichap, said. Bogoyevac explained that, due to the length of sales transactions, it’s possible that impacts to property sales haven’t played out yet because recent sales entered escrow before the final decision on AB 1482 was made.

Robert Stepp, president of multi-family brokerage firm Stepp Commercial, said that he has seen a sales increase in recent months. “Over the past few months, we’ve
seen multi-family sales volume increase somewhat as some owners are looking to move to high-growth, out-of-state markets that are less regulated and more politically friendly to investors,” he told the Business Journal via e-mail. “In the past six months, we have traded a number of clients into multifamily assets in Arizona and Florida, including a 144-unit property in the Phoenix-Tampa market.”

Stepp observed that rental rates have been increasing at a rate of about 2% each quarter for the past six quarters. “We saw the biggest jump in rents from Q2 to Q3 of this year, with rents increasing by 3.29% to an average of $2,073,” he wrote.  “We believe the most recent jump in rents is already showing the unintended consequences of California’s Statewide Rent Control Bill, AB 1482. . . . Many owners who have not consistently raised rents in the past are now raising their rents, knowing that if they miss an annual increase, they will not be allowed to make up the difference in the future.”

Those most impacted by the new legislation will be long-term owners who haven’t kept their rental rates at market level, according to Bogoyevac. “My opinion
is that the greatest effect is going to be on those that have been the most generous to all the tenants, and it’s really sad. The people who have owned buildings for 10, 15, 20 years and have been generous with not increasing rents on their tenants, those particular owners are going to get hit the hardest in terms of value of their property,” he said.

Bogoyevac noted that the law didn’t account for the gap in time between its approval this fall and its 2020 implementation date. “People that have owned for 20 years who haven’t raised the rents now all of a sudden are giving 60-day notices to people or cranking [up] the rents on people that they never would have [otherwise], and now that has created a new problem,” he said. This issue is why the Long Beach City Council requested a moratorium on no-fault evictions in early November.

Property values seem to be stable, and perhaps still increasing, despite any concerns over rent control. “The continuing economic expansion of the city and low inventory are the driving factors in
keeping multifamily property values appreciating, albeit at a slower pace,” Stepp said. “Sales prices are flattening, however, as buyers are finding it harder for deals to pencil out at the prices that sellers are seeking.”

Moving forward, both Bogoyevac and Stepp expect rental rates to rise consistently under the new law. “In addition to ensuring consistent annual increases, we will start to see more inventory on the market from owners who are fatigued by the increase in regulation,” Stepp said.  “There will be some interesting buying opportunities for savvy investors and those in markets that are accustomed to rent control, such as San Francisco, Santa Monica and Hollywood. Lenders are going to be concerned about the rent rollbacks, which will potentially tighten long-term values.”